We have a little something for everyone! Our books are categorized below by their genres! Scroll down and see what catches your eye…

Published by our imprint TIN CAN: science fiction, fantasy, and paranormal 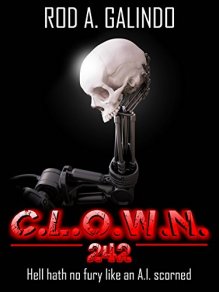 Jonas held his breath as the murderous machine turned toward him.  Had he been seen?  No.  Not yet.  Could he make it out of the submarine’s hangar and to a life boat?  These C.L.O.W.N. bots were fast, but his bionic parts would give him an edge.  Or would they?  This bot was different; its organic brain made it as smart as any human, and just as capable of fury.  Not to mention jealousy.  The seared flesh of his crewmates reached his nose again.  He wouldn’t end up like the others, nothing but a collection of machine parts and polished bones.  Not like the others…

What do all of these have in common? Not much, except for the characters in this collection of science fiction short stories, they mean the end of the line….

From Twilight Zone-style twists to a romping space-western adventure a la Firefly, these award-winning stories are now presented together as a complete collection science fiction lovers of all types can enjoy.

Something lies in wait at the furthest reaches of our solar system, where our sun’s magnetosphere and solar wind no longer hold the deadly background cosmic radiation at bay.

Seven brave explorers on an international endeavor have followed Voyager 2’s path, chasing the ancient probe far beyond the orbits of Pluto and her sister dwarf planets Eres, Haumea, and Makemake. The date is May 7th, 2177. What began as an unremarkable day in the sixth year of their incessant mission becomes one the crew of Explorer Two may not live to forget.
And one that the population of the Pale Blue Dot they call home never remember. 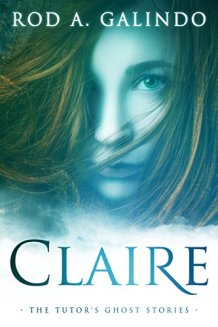 Claire: The Tutor’s Ghost Stories by Rod Galindo
A NOVEL

Claire Harvey is no ordinary 16-year-old. Her past holds a terrifying secret only young Max fully believes. When not tutoring him in mathematics, Claire entertains Max by weaving the minor hauntings of the old, Gothic house on Hollow Street into tales that chill him to the bone. Claire is convinced the boy could someday find the quantum key to crossing over to the Other Side, but right now he can barely get through an assignment without the help of his tutor.

As the lonely decades pass, Max and Claire make it their mission to learn everything they can about the paranormal world. Max’s goal in life is to set every ghost free from its haunt, where no soul truly desires to remain. But the U.S. Department of Paranormal Affairs and its demon-hunting mechanical spiders have a mission of their own. If they step foot into a haunted house, a ghost’s choices are clear: Hell or Oblivion. And to the leader of the ghost hunters assigned to clear Max’s childhood home, he himself becomes expendable, and Claire may lose her very soul.

Capsule by Kristin Helling
A NOVEL

Arcturus Holst is famous before he’s even born.

He’s the first human ever born in outer space, and if the mission is carried out correctly, would be the only human to experience what is beyond the knowledge of our existence.

Technological advances in space travel have allowed humans access to the outside of our galaxy.

The only thing is- it is a suicide mission.

Two married scientists sign up for the job. They needed Arcturus to carry out their life’s work. His importance to all of mankind was instilled in him from birth, but he can’t help but struggle with the fact that none of this was his choice.

Living his life alone, behind digital screens, and in the merciless void of interstellar space, can he discover the answer to his questions: Was he born as just a science project, or does his life have a greater purpose?

The Tutor: A Ghost Story by Rod Galindo
A SHORT STORY

Young Max hates Fourth Grade math. His teenage friend Claire is an ace with numbers, and is always eager to help him with his homework. Max adores her, and loves when she visits him in the old house on Hollow Street.  Claire can also weave a ghost story like no one else. But her favorite tale always sends chills down his spine, and hits a little too close to home…

Galindo (The Tesla Project Series Part I)
A NOVELLA

The classified time travel program known as The Tesla Project, launched in 1965 by the Defense Advanced Research Projects Agency, or D.A.R.P.A., was designed to help America win the Vietnam Conflict. The U.S. military has its hands full reverse-engineering the technological wonders various “Travelers” have brought back from the future: microwave ovens, pagers, beta-max players, smart phones, and of course, advanced armor and weaponry.
Sergeant First Class Mike Tyler, a.k.a. Traveler Three, has been informed his trip to 2075 could prove tricky. The camera sent before this “jump” transmitted a pitch-black world right before it was destroyed. Tyler is on a strict deadline to find answers; the portal back to 1975 will open and close again in four hours whether he’s there to step through it or not. “Just another day in the Army,” he says to himself, and enters the cavernous temporal sphere, currently charging up for his trip to 2075…
Sergeant Tyler’s convergence with History begins now.
BUY NOW

Rostam Hobbs had been on track to make Chief Engineer on the New Horizon space station … before the dreaming interrupted his sleep patterns. Before the miscalculation that nearly froze the entire west residence wing into a block of ice. Before he’d been reassigned to a junk-bucket scout ship to get lost in some godforsaken corner of space.

Dreamers were supposed to have been identified and utilized by the time they hit puberty, and he’s well past that. Maybe they wouldn’t take him now, given his age, but he doesn’t dare chance being found out. Most people are blissfully unaware that Dreamers even exist. But he works in Engineering.

He knows everything about Dreamers.

And on a ship this small on a mission so long, it’s getting harder and harder to hide …

Published by our imprint ADRENALINE: pulse-pounding thrillers and mysteries to keep you on your toes

A kidnapped psychologist. A murderous warden. There’s more to this prison than meets the eye…

Dr. Raine Walsh has a right to be paranoid. The expert psychologist has spent far too much time in the minds of the criminally disturbed, but that’s no reason for her to be drugged and thrown into prison. Raine can’t remember the crime that got her locked up, and she wonders if her growing paranoia has destroyed her sanity…

Raine is determined to solve the mystery of her twisted incarceration, but finding allies is a dangerous game. Some of her fellow prisoners are far from innocent, and a guard confides that he’s also been kidnapped and forced to play a role. The problem is that the warden controls the compound with an iron grip. Her only chance of escape could put her and the other inmates in grave danger…

The Altruism Effect is the first book in a series of psychological thrillers. If you like gripping suspense, realistic characters, and mind-bending plot twists, then you’ll love Kristin Helling’s kidnapping thriller. 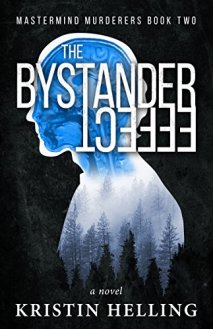 A psychologist looking for closure after her horrific kidnapping. An untested detective desperately seeking to prove himself. And a killer who could be anyone…

Raine Walsh has escaped the Warden, but the ghosts of her wrongful incarceration still haunt her. While she has her freedom, many of the innocent people she was captive with do not, and as time passes, Raine becomes more and more concerned the Warden will never be found and brought to justice.

Detective Jonah Heely’s first case is a chilling echo of the Kitty Genovese murder from 1964.

Despite the victim being killed near plenty of witnesses, Jonah has no leads. Worse, it’s soon clear he’s tracking a serial killer, and time is running out for the killer’s next victims. Noticing similarities between this string of new murders and Raine’s unsolved kidnapping case, and with his job on the line, Jonah turns to Raine for help.

Raine seizes the opportunity to help in order to keep the hunt for the Warden alive. Together, she and Jonah must find the killer before he strikes again. But it’s hard to catch a killer who uses the bystander effect to their advantage… and who may be closer to both of them than either could imagine…

The Bystander Effect is the second book in the Mastermind Murderers series. If you like haunting, heart-pounding, edge-of-your-seat thrillers, then you’ll love this psychological thrill ride from Kristin Helling. 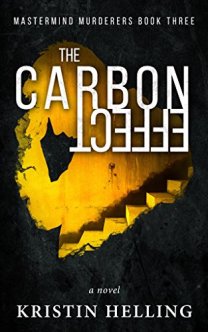 One person’s delusion is another’s reality…

Psychologist Raine Walsh is at it again. One of her clients thinks he’s being stalked, but the police find no evidence. She seems to be the only one who believes there’s more to his story than pure delusion.

When Raine’s client is kidnapped, Detective Jonah Heely doesn’t think it’s coincidence. Suspended or not, he’s determined to find out why Raine herself always seems to be at the scene of the crime.

Alex Wood just wants to be a normal college freshman, but he keeps dreaming that he murdered someone. When disturbing clues hint that the nightmares might be real, Alex begins to question what he might really be capable of.

Raine’s quest to protect those she cares about, Heely’s obsession with her involvement in these crimes, and Alex’s investigation into the dark corners of his own mind collide in The Carbon Effect, the third book in the Mastermind Murderers series.

If you like mind-bending plot twists, then you’ll love this page-turning continuation to these psychological thrillers.

Published by our imprint WHISKERS: fun and beautifully illustrated tales for the little ones 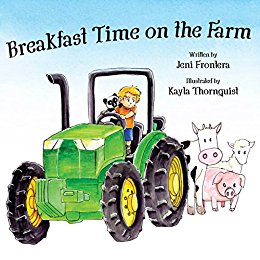 Breakfast Time on the Farm by Jeni Frontera

There’s just one thing four-year-old William wants to know: what in the world do cows, pigs, and sheep eat for breakfast?

Luckily, today his MeeMaw is taking him to a farm, and they arrive just in time to help feed the animals! Follow along with William and Farmer Paul as they discover the answer to William’s very pressing question.

“A delightful picture book with a charming story about a place many children never get to visit, a farm.” – Rachel Ellyn, author of KC Bell: A Manx with a Tale

Breakfast Time on the Farm is a story inspired by a question from a real 4-year-old. This beautifully illustrated picture book takes adults and children alike on a fun adventure through a farm, while teaching real-world knowledge about various farm animals, too! 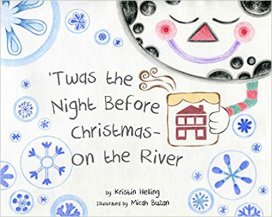 ‘Twas the Night Before Christmas- On the River by Kristin Helling

This book is based on Parkville, Missouri’s annual festival Christmas on the River, told from the eyes of a Barista at Parkville Coffeehouse. The contents of this book are an adaptation to the poem, “‘Twas the Night Before Christmas” by Clement Clark Moore, published in 1823.

Published by our imprint NOTION: thoughtful poetry for the inquiring mind

A Bird Between by Spencer Carney

This chapbook of poetry isn’t just a love letter to Los Angeles, it’s for anyone who has come to the big city from a place more traditionally grounded in nature, who feels discombobulated by the urban sprawl.

A Bird Between encourages you to widen your scope and notice where nature and city truly intermingle. And there, you just may carve out a place akin to harmony.